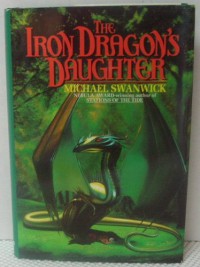 (Sigh)...Another one of those cases where GR's star-rating system doesn't adequately express my reaction to a book. I'd give this one 2.5 to 3 stars (and, since it's the New Year & I'm feeling generous, I'm rounding up) - It's not bad; Swanwick is a decent writer. It's just not my "cup of tea."

The only reason I picked this book up was that it was 50 cents at a library sale. In general, I'm not a huge fan of urban fantasy so I was never drawn to the book when it first came out, despite the rave reviews it got (and gets). Now that I've read it, I'm still not a urban-fantasy fan and I'm not terribly impressed by Mr. Swanwick. Which doesn't mean I didn't enjoy reading the book, just that it isn't that memorable an experience and I probably won't be reading any more Swanwick in the future outside of a trusted source raving about another one of his novels.

Actually, the character of Jane, the novel's hero, is quite well drawn and believable. I've noticed in some reviews here that readers complain that Jane is a thoroughly selfish and unlikable person, which is true enough as far as it goes but considering her "role models," I was surprised at the amount of empathy she did exhibit. For example, given the chance to betray some school acquaintances (not even friends, really) to save herself, Jane doesn't and very nearly gets exposed as a human changeling and escapee from the dragon works. In fact, I was very disturbed and not entirely convinced when she turned into a serial killer in order to supply the dragon of the title with the energy it needed to fulfill its purpose. But that situation raises the question of just how much influence the dragon has over Jane's actions. It is able to manipulate her subconsciously into breaking their initial pact and allwoing it to go off on its own.

As I've indicated, however, I was never interested enough in the setting or the characters to care all that much. It's a readable book with believable characters and situations but I personally wouldn't recommend it.
Tweet
3372 BOOKS