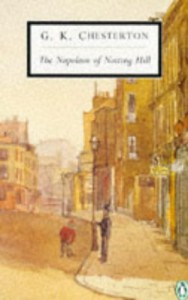 The first chapter of Notting Hill lays out the author’s theory about the “art of prophecy.” Prophets observe the fads and fallacies of their own eras and project their logical conclusions into the future. Thus, H.G. Wells envisions a secular, scientific utopia where religion and superstition are banished to histories. Or there’s Cecil Rhodes’ vision of a British empire, racially separate from its “dark children” but ruling benevolently over the world. In our own time, I think Chesterton might have singled out Ray Kurzweil and his Singularity or the cyberpunk genre, in general as examples of this phenomenon.

In Chapter 2, Chesterton (writing as someone looking back on the 20th century) explains what really happened. In two words, “Not much.” A century on from Wells’ and Rhodes’ era, England looks not much different than it did then, except moreso. Britain is one of several Great Powers (read Western Europe and America) that have subsumed all other polities, enforcing their “civilization” and mores worldwide, and bringing about a stultifying peace. The common man has lost faith in Revolution – that there can be something better than what IS. Change comes about through the slow, gradual, almost invisible process of Evolution. “Nature’s revolutions are the only successful ones. There has been no conservative reaction in favour of tails.” (p. 14)

From the same chapter:

“Democracy was dead, for no one minded the governing class governing. England was now practically a despotism, but not an hereditary one. Some one in the official class was made King. No one cared how; no one cared who. He was merely a universal secretary.

In this manner it happened that everything in London was very quiet. That vague and somewhat depressed reliance upon things happening as they have always happened, which is with all Londoners a mood, had become an assumed condition. There was really no reason for any man doing anything but the thing he had done the day before.” (pp. 14-15)

Yet the seeds of chaos are present in this situation as that “universal secretary” has absolute authority, and it happens the office falls to a certain Auberon Quin, whose description I transcribed in an earlier Comment but is so wonderful that it bears repeating here: The little man, whose name was Auberon Quin, had an appearance compounded of a baby and an owl. His round head, round eyes, seemed to have been designed by nature playfully with a pair of compasses. His flat dark hair and preposterously long frock-coat gave him something of the look of a child's `Noah'. When he entered a room of strangers, they mistook him for a small boy, and wanted to take him on their knees, until he spoke, when they perceived that a boy would have been more intelligent. (pp. 18-19) Quin cheerfully takes up the scepter because, for him, it’s all an immense joke, and he happily putters about the Palace acting the eccentric. One of his more quixotic pronouncements is to issue the Charter of the Cities, which gives the boroughs of London effective independence. For 10 years, the city gets by with little substantive change in quotidian routine except that the new Provosts must dress up in ridiculous, Medieval costumes and be attended in all public spaces by halberdiers until the provostship of Notting Hill falls to Adam Wayne, a 19-year-old romantic with an exaggerated sense of patriotism regarding his neighborhood. When the other cities of Greater London plan to build a road that passes through Notting Hill, Wayne stirs up his subjects to resist, with force if (it turns out, when) necessary. A marvelous example of his rhetoric occurs on page 74, when Wayne accosts a grocer and calls forth his love of Notting Hill:

“I know, I say, the temptations of so international, so universal a vision of wealth. I know that it must be your danger not to fall like many tradesmen into too dusty and mechanical a narrowness, but rather to be too broad, to be too general, too liberal. If a narrow nationalism be the danger of the pastry-cook, who makes his own wares under his own heavens, no less is cosmopolitanism the danger of the grocer. But I come to you in the name of the patriotism which no wanderings or enlightenments should ever wholly extinguish, and I ask you to remember Notting Hill. For, after all, in this cosmopolitan magnificence, she has played no small part. Your dates may come from the tall palms of Barbary, your sugar from the strange islands of the tropics, your tea from the secret villages of the Empire of the Dragon. That this room might be furnished, forests may have been spoiled under the Southern Cross, and leviathans speared under the Polar Star. But you yourself – surely no inconsiderable treasure – you yourself, the brain that wields these vast interests – you yourself, at least, have grown to strength and wisdom between these grey houses and under this rainy sky. This city which made you, and thus made your fortunes, is threatened with war. Come forth and tell to the ends of the earth this lesson. Oil is from the North and fruits from the South; rices are from India and spices from Ceylon; sheep are from New Zealand and men from Notting Hill.”

Chesterton decries the dulling down, the stripping of meaning that he sees overtaking society and asks, in Wayne’s voice:

“Is the normal human need, the normal human condition, higher or lower than those special states of the soul which call out a doubtful and dangerous glory? Those special powers of knowledge or sacrifice which are made possible only by the existence of evil? Which should come first to our affections, the enduring sanities of peace or the half-maniacal virtues of battle? Which should come first, the man great in the daily round or the man great in emergency? (p. 73)

Wayne (and Chesterton, I think) is clearly on the side of Revolution – believing in something greater than what is and a life meaning more than just existence. The result is war between the boroughs, a war that rapidly escalates from a street brawl to one with armies and sieges and all the death, tragedy and stupidity of such violence. But is also rekindles (by implication) creativity and charity and other positive virtues. As Wayne says to King Auberon in “The Last Battle” as they gaze out over the battlefield:

“It is the coming of a new age, your Majesty. Notting Hill is not a common empire; it is a thing like Athens, the mother of a mode of life, of a manner of living, which shall renew the youth of the world – a thing like Nazareth. When I was young I remember, in the old dreary days, wiseacres used to write books about how trains would get faster, and all the world would be one empire, and tram-cars go to the moon. And even as a child I used to say to myself, `Far more likely that we shall go on the crusades again, or worship the gods of the city.’ And so it has been. And I am glad, though this is my last battle.” (p. 148)

And a little later on, when Wayne pulls down an oak tree on himself and the enemies besetting him:

“I am doing now what I have done all my life, what is the only happiness, what is the only universality. I am clinging to something. Let it fall, and there let it lie. Fools, you go about and see the kingdoms of the earth, and are liberal, and wise, and cosmopolitan, which is all that the devil can give you – all that he could offer to Christ only to be spurned away. I am doing what the truly wise do. When a child goes out into the garden and takes hold of a tree, saying, `Let this tree be all I have’, that moment its roots take hold on hell and its branches on the stars. The joy I have is what the lover knows when a woman is everything. It is what I know when Notting Hill is everything. I have a city. Let it stand or fall.” (p. 152)

The final chapter, “Two Voices,” has proven to be the most difficult for me to get through. Not because of its length (5 pages in this edition) but because I want to reconcile Chesterton’s conclusion – “Whatever makes men feel old is mean…. Whatever makes men feel young is great” (p. 153) (which I accept to a degree) with my own misgivings about what the author is willing to accept in pursuit of that “youth.” Specifically, that there’s an equivalence between “a great war or a love story.” I would like to believe that we can be eternally childlike in our capacity to marvel at the world and strive for something better and greater, yet adult enough not to revel in the darker nature of that innocence, the “glory” and “virtue” of war and patriotism. In an age when the “Dark Side” has access to weapons like A-bombs, depleted uranium, weaponized anthrax and cluster bombs, not to mention your average machine gun, among other obscenities, I don’t think we can afford Chesterton’s blithe, joyful acceptance of violence as part and parcel of a healthy, vibrant society. (It is noteworthy that the most potent weapons used in the book’s war are swords and spears.)

In conclusion, this is a marvelous book even if you don’t want to try and wrap your brain around the moral quandaries Chesterton raises. It’s funny, crisply written and makes you think, and what more could you ask for in a book?
Tweet
3372 BOOKS